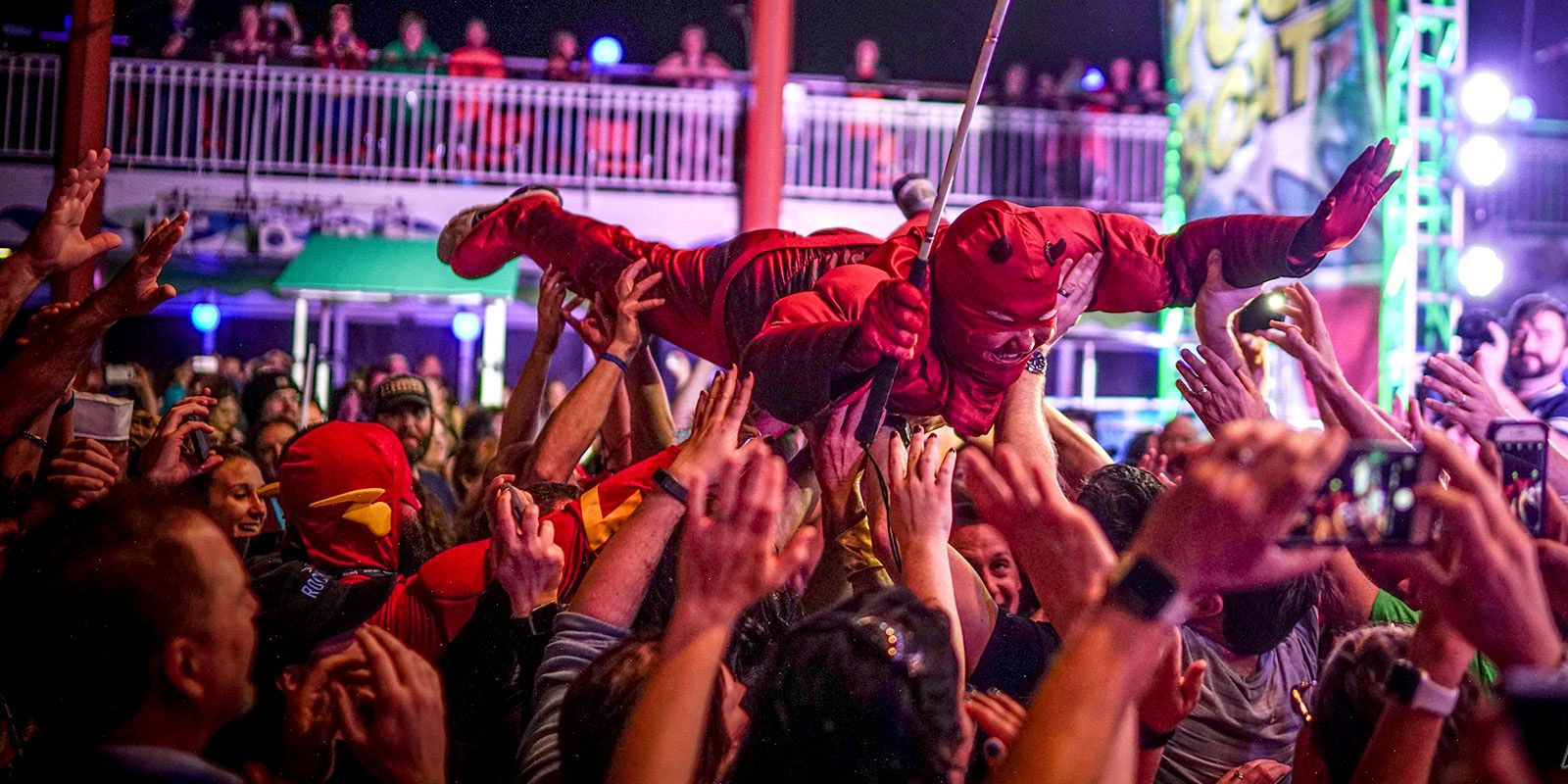 “And God said, let there be light”! As someone who is blind, I couldn’t have understood the gravity and magnitude that The Rock Boat would have on my life and the world. After a year of intense hell (a multitude of catastrophic events), I was nearly crippled by a car that ran a stop sign. Through the heroic sacrifice of my guide dog, Simon, he saved me and my then 4-year-old son. I was in a very bad, dark place! My wife, Kate, and I were nominated for a “scholarship” to sail on The Rock Boat in 2014. My friend and business partner had been sailing on the event since 2003, so I knew about the fantastic music and the antics but had never cruised. So true virgins we were, and what happened changed the fabric of my world forever.

The story is very convoluted, but suffice it to say Gaelic Storm’s singer, Patrick Murphy, brought me on stage to publicly apologize for unwittingly ragging on “the Blind Guy” in the crowd the night before. TRB magic enveloped the entire Pool Deck, and Pat & I hit it off royally! He brought me up on stage to dance for "Darcy’s Donkey" and in the heat of the moment, they sent me out crowd surfing! Now, I had never crowd surfed but as I was being passed all over the Pool Deck, with the crowd shouting, "Dave! Dave! Dave!”, I felt the darkness surrounding me disappear.

My eyes were now wide open, and I saw the “light.” I was healed. No more demons, no more pity party, I was filled with the power of the Rock Boat spirit! I was never alone after that moment, and I had truly become one of the Rock Boat Family. The final night, I was honored to present Gaelic Storm in the Stardust Theater, and even got to hit the cymbals for "What’s the Rumpus". Naturally over the years, Dave the Blind Guy has gotten into some shenanigans and has loved every minute of it.

Latest Moments
I stood there stunned for a good 5 seconds before saying... YES!
Cassius D.
Read
This one's for you, Dad.
Mike B.
Read
It was all about the music and the love!
Sheri and Noey B.
Read
The pure joy was felt and expressed in all the smiles around the piano.
Larry F.
Read
I still find glitter in random places that remind me of just how much fun I had.
Cale A.
Read
The Rock Boat has been so much more than just a vacation.
Melissa G.
Read
This was a once in a lifetime experience that I will be forever grateful for.
Michelle K.
Read
It felt like all barriers had been stripped away between us...
Maxim S.
Read
It was like the greatest high school reunion, without all those painful school memories!
Andrew T.
Read
It felt like that was the precise moment that we committed to one another, and it was truly amazing.
Kathy O.
Read
This was one of the greatest moments of our lives and one that we will forever cherish.
Stephan K.
Read
I feel like my passion for new music has been re-ignited.
Stephanie L.
Read
We partied like we were kids again
Steve and Barb L.
Read
Tell Us Your Moment Tell Us Your Moment!
© 2022 Sixthman. All Rights Reserved.   Privacy Policy   Cookies Policy
We use cookies to improve your experience on our website. By browsing this website, you agree to our use of cookies